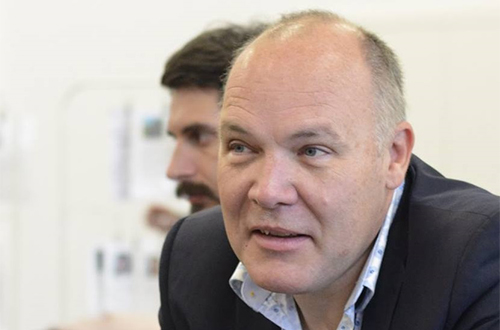 In a changing economy, with a rise in self-employment and small business how can we help people gain security and where possible grow and develop their business ideas?

Britain is after all, renowned as a nation of invention and creativity. But come up with a business idea and trying to get a loan for it from risk averse banks is nearly impossible. Deputy London Mayor for Business Rajesh Agrawal tells the story of how he wanted to start a business but was turned down for a loan as he was lacking collateral, he turned up a few weeks later asked a different department for a similar loan to buy a car which was granted, he explains that he still can't drive but has built a multi-million pound business.

That amusing story still happens to small firms. If they can't get guarantees then have to put up their homes as security or of course, it they are tenants, the answer is hard cheese. Once again discrimination against the precarious self-employed that have created two in three new jobs since the financial crisis.

We can complain about this, and should do, but the solution is to do what the labour movement does when it is the most successful - that is to empower people. This year Christina Rees, Labour and Co-operative MP for Neath has introducing a ten minute bill for the creation of mutual guarantee societies has passed the first stage in the Commons. Where it to be become law it would be a huge step in empowering small firms and the self-employed.

It is important, to explain, consider that this problem of credit happens worldwide but elsewhere and particularly in Europe it is solved by local firms coming together to form Mutual Guarantee Societies. They are co-ops that stand together and stand collatoral for each other. They don't lend the money. It works a bit like a Dragons Den (but nicer) you convince the society of your idea and they will jointly stand guarantee. In Europe a lot of small business finance follows this model. In 2014 the AECM member organisations had a total guarantee volume of over €76bn and issued a total volume of €25bn in new guarantees.

But not in the UK. In the early 1990s we had set up about six regional Mutual Guarantee Societies as co-op societies across England, membership was growing, banks were interested, Co-op development agencies were supportive and in many cases they were actively involved but the regulator at the time (and this was before Gordon Brown created the FSA), argued that they were running an insurance business and needed a minimum capitalisation of £70 million.

We can change all that. The Bill would establish a legislative definition of a mutual guarantee society and develop a regulatory treatment for Mutual Guarantee Societies in line with UK financial service regulation and related EU Directives.

Mutual Guarantee Societies are worthy of consideration by parties as it a positive step in empowering business and unleashing talent and creativity so our nation can prosper. It is a change that Labour Business and others have been pushing hard for.

Philip is a Labour Business ambassador for freelancing and the self-employed. He was the co-author of their paper ‘The Freelancing Agenda’ and also and co-wrote ‘Not Alone – Co-operative and trade union solutions for the self-employed’.